A friend recently sent me an article on changes in the yoga clothing industry that brought up some amusing memories. Basically no one had a clue what to wear doing yoga.  Athletic, movement oriented yoga (in hot rooms) was new to the American scene in the 1970's, and the few people who came to the yoga rooms just wore whatever athletic gear they were used to: heavy, drawstring sweats, heavy sweatshirts, loose tee shirts.  Some women thought to wear leotards, but somehow forgot to factor in tights or even underpants; same with men in speedos.  It was quite a scene with tee shirts flopping overheads in the inversions, sweats becoming almost life-threatening as they became heavy with perspiration and at the same time held heat close to the body.  I'll leave the look of the leotards and speedos in leg lifts, splits, wide legged deep forwards folds to your imagination.

The article also put me in mind of the evolution of clothes in other movement activities. 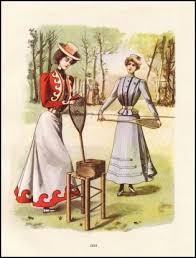 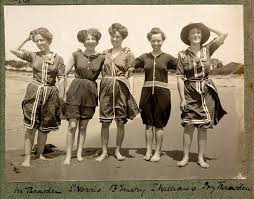 Of course I can't show you pictures of women's clothing in early days of yoga because they weren't allowed to practice until just over 100 years ago.