Continuing from Day 2/365...Poussin and Lorrain (or Claude, the name by which he signed his artworks) are both pioneers (in Claude's case, one would virtually say, 'inventor) of the idealized landscape painting style. Friends who spent many days walking through through the Italian countryside observing and sketching, their works can appear similar - particularly in Claude's mature years when he, like Poussin, employed strong classical elements such as ancient ruins and figures in antique togas. Ciwt at least was a little vague on their differences at first, so in case you are like her - or just interested, here are a few things to know. 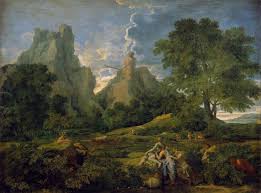 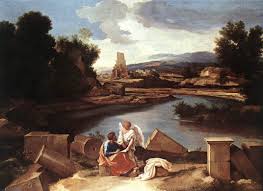 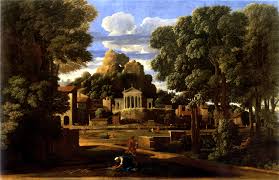 Landscape with the Ashes of Phocion, Collected by His Widow, 1648,

Poussin was first and foremost a rationalist who obsessively planned every aspect of his style from line to appropriate color.  The amount of thinking and theory that informs Poussin's paintings is truly impressive.. Often using ancient and philosophy as his inspiration, he felt the only subjects worthy of being painted were grand, epic stories from ancient mythology and early Christianity. Even in his landscapes; though they are beautiful and carefully executed, nature is secondary to the story of the painting which takes place in the foreground and commands the most attention.  The landscape itself is 'rational,' working its way back in the painting/away from the story in receding horizontal tiers.

Interestingly it is Poussin's classical balance and stability as well as his emphases on harmonic geometric forms that attracted and greatly influenced Cezanne centuries later. And, through Cezanne, Poussin would also have an indirect impact on later artists like Picasso, who claimed Cezanne as his artistic father.