CIWT went to the de Young today for an Au Revoir spin through the Hockney show that closes day after tomorrow. 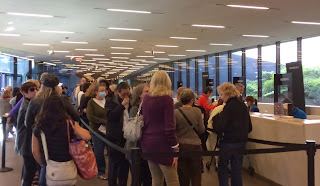 Membership Line (specially want to see the show next to the coughing man with his friend in the surgical mask). 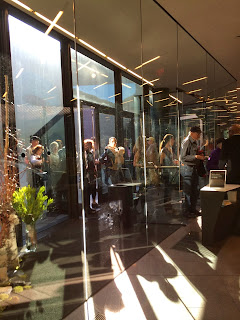 Lines Outside the Main Entrance 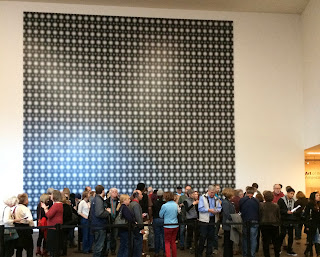 Waiting in the Lobby Under one of the de Young's Least Favorite Art Works.  (Among other things it makes many people dizzy and nauseous).

Happy that I'd seen the show quite a few times (and never having seen the museum this busy), Ciwt decided to check out an installation by James Turrell, a famous genius she had just become aware of.  Maybe more about him another day; for today, continuing the theme of strange museum encounters she'd stumbled into.  The small installation was conceived by the artist as a space to meditate/focus on the essence and effects of pure light.  When Ciwt arrived it was filled with people chattering away with each other as if they were sitting around a lounge.  Another woman sitting alone with her laptop computer open picked up her ukulele and began strumming.  After a while she began singing Somewhere Over the Rainbow at top voice. 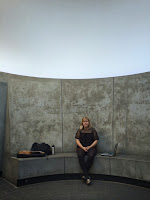 Like this was her private rehearsal hall. The computer must have contained lyrics and musical notes.

Museums have been working for the past decade or so to redo their images, become 'public friendly' instead of the removed bastions they had the (deserved) reputations for being.  It might be working beyond their wildest dreams...
Posted by Ciwt at 5:32 PM