Ciwt recently went to a docent lecture on Ancient Greek art.
We all know something about Greek statues (eg, Venus di Milo)  and architecture

But Ciwt did not know particulars about the ancient Greek symposium.  Since the FAM Greek art collection is homogeneous with most being symposium serving pieces, the lecture concentrated on that ancient greek social institution.

Associating the word 'symposium' with Plato, Socrates and modern conclaves of scientists and scholars, Ciwt has long assumed it to be an elite, erudite gathering.  And some symposia were. But in actuality, symposia were drinking parties, male drinking parties.  The men were served by slaves and male and female prostitutes were often present for 'entertainment.'  Each symposium was organized around a specific topic chosen by the host. Topics ranged from philosophical dialogues to the most mundane - sports, plays, war...no subjects were off limits, and presumably symposium discussions that started at a noble level would often devolve into debauchery as huge kraters 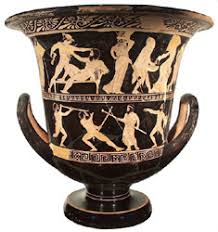 of thick, potent though diluted wine sat in the middle of the symposium room (andrōn) and participants' cups (kylix) were constantly refilled by pitchers (oenochoe) carried to them by slaves.

For a variety of reasons, many writers prefer to highlight the proper, aristocratic, structured nature of symposia.  The Metropolitan Museum for instance opens its Greek symposium discussion thusly: The Greek symposium was a male aristocratic activity, a tightly choreographed social gathering where men drank together, conversed, and enjoyed themselves in a convivial atmosphere.*

But other writers paint a slightly different picture.  The article below is entitled Men Behaving Badly and points out that 'no one left a symposium entirely sober.'** Ciwt is inclined to believe this writer and others along this line - especially when looking at the paintings on the ancient Greek
vessels which depicted symposium activities.