Sometime in late 1892 Stieglitz bought his first hand-held camera, a Folmer and Schwing 4x5 plate film camera. Prior to this he had been using an 8x10 plate film camera that always required a tripod and was difficult to carry around. He was invigorated by the freedom of the new camera, and later that winter he used the new camera to make two of his best known images, Winter, Fifth Avenue and The Terminal. 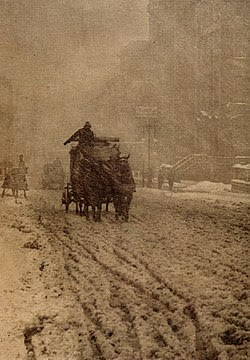