Ciwt has had trouble for many years with the art of Georgia O'Keefe - and to some extent O'Keefe herself.  This may be due to the commercialism and overexposure of the Famous, Photographed, Woman, Modernist, New York, Santa Fe Artist.  And did I say YAY?  It is just difficult for Ciwt's regard to approximate the reverence and awe that is accorded O'Keefe, along with the calendars, posters, pens, umbrellas, carryalls.  (Now if it were Matisse, the love of Ciwt's artistic life.....).

So this morning Ciwt's expectations were dim when she was one of the first at the Member's Preview of Modern Nature: Georgia O'Keefe and Lake George opening tomorrow.  'Dim' is an ironic word because what struck Ciwt for the first time in O'Keefe's work was the passages of intense, radiant Light she achieves.  Ciwt's visceral reaction to a few canvases, such as Jack in the Pulpit #5, 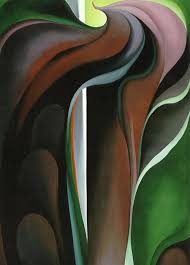 was to shield her eyes as you might when looking at neon in a black room.

I don't remember taking in this primordial, whammo light in her works before.  It is beyond glowing and radiates white in a few paintings, red-orange in others. There is an incredible blue, brown and green pastel where the optically seductive way the colors are laid together beats Rothko and Albers to the punch by a good twenty years.

O'Keefe lived with, later married Alfred Stieglitz, arguably the most famous - certainly the most influential - photographer in the world in the early 1900's.  She was surrounded by the photographers Stieglitz befriended and promoted, and was particularly close to Paul Strand whose work she greatly admired. It can be assumed that she was often in the presence of dark room light 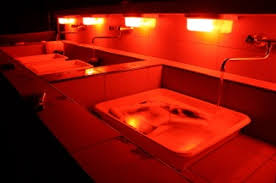 and Ciwt speculates that this finely focused, intensely glowing light may have influenced her artistic eye and emboldened her when laying her own vibrant colors on paper or canvas.

In any event, O'Keefe is surely a colorist, and a 'shapist' playing freely with forms and perspectives.  But all this was in service of her most fundamental desire to convey her psychological-emotional sense of what she was seeing and portraying.  It was her deepest wish to access and describe her subject in terms of how the totality of it resonated within her.  And so often it is the vibrant energy created by placing certain colors next to each other - as well as those fully saturated, partially blinding passages of red-orange and cold, unforgivingly clear white - that pin-points the inner places.

The O'Keefe I saw today was deeply involved with color theory, mixing colors with a feeling eye to the visual effects of specific color combinations. Her most successful creations rely on color energy for their ultimate fulfillment.  And in this way, more than most artists, she is ill-served by all the posters, greeting cards, calendars and other media that reproduce her work - including the images on this page.  The reproductions can capture the shapes, the perspectives, the apparent subject and general color field - but they cannot capture the glowing color energy that carries so much of the feeling sense and impact of her work.

Happily for Ciwt, the quality of the de Young show reversed the deadening effect of all those reproductions.  There are numerous early originals, well organized, well spaced with informative signage and historical photographs. So, on this first (Valentine's Day) trip through the Lake George, Ciwt was pleased to access her own truer sense of O'Keefe's art.

Which begs the question, What is that sense?  Stay tuned...