Were it not for this painting, there might not have been a telegraph or a Morse Code.  It was the masterpiece of Samuel F.B. Morse painted at the Louvre where he selected his favorite representatives of European painting, copied them in miniature and 'rehung' them in this personal gallery at the Louvre.  His miniature copies are exquisite, and difficult to achieve.  Technically he had a rolling scaffold built to place himself at the height of some of the paintings and became something of a famous spectacle at the Louvre for this apparatus.  (If you are curious about the titles/artists of the works he chose, go to http://faculty.washington.edu/dillon/Morse_Gallery/ .  It's fun and interesting).

His intention was to display the painting in the United States where Americans would come in droves and pay an admission fee to take their own tour of his Louvre and see for themselves the wonders of European art (like these modern day visitors). 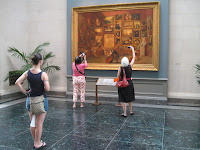 When
the exhibition of the painting was complete and crowds had dispersed, he planned to sell the painting to his friend, James Fennimore Cooper. (Morse actually included Cooper with his wife and daughter on the left of the painting as well as painting himself in the center).

But very few came to Morse's 'field of dreams,' and Cooper fell on financial hard times, so Morse sold the painting for a virtual pittance and turned his attentions to an idea which had begun to intrigue him while he was in Paris. That idea was the telegraph. Abandoning painting, he perfected the world changing device, invented a code for it and then went back to France to secure a French patent.  While there he met Louis Daguerre, who had invented photography - or the daguerreotype as it was then known.  And with Daguerre's permission, he brought photography back to the United States.

Such perhaps is the life of the true artist, inventor and visionary,  dot-dot-dot