Several of the Legion's Impressionist shows have had early rooms filled with paintings by Eugene Boudin (Fr. 1824-1898)  but no particular signage.  Ciwt became curious and studied a bit on Boudin to learn that he was France's premiere painter of the sea in the years just before Impressionism.  He was also the first to work entirely outdoors (en plein air) and actually mentored the younger Monet in this method of painting. They were great friends, painting companions, and throughout his life Monet spoke of his appreciation for the effects Boudin had on his art.

Boudin was not/did not consider himself an Impressionist although he showed his work at the first Salon.  But looking at his brushstrokes you can see freedom, looseness, the essential elements of Impressionism.  You also though see a very completed painting.  Even though Boudin painted outdoors and in the moment, he believed each art work needed to be a complete and elegant product.  The impression of sketchiness that characterized many of the Impressionist paintings was antithetical to Boudin's aesthetic.

Boudin was first and foremost authentic.  His father had been a seaman as had he himself (with both eventually retiring from the sea to work as framers).  He knew the life of the sea.  He also knew and valued fashion, how people dressed and was an observer of behavior and mannerisms, particularly of the new French leisure class who traveled by the equally new railroad to beaches throughout France.  Although we don't see the faces of most of his subjects, their costume is absolutely authentic and their body language is utterly believable. 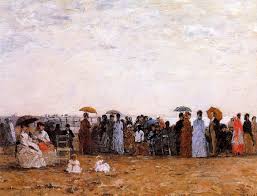 
Boudin is known especially for his skies.  He owned them.  No excessive romanticism, just perfect capturing. 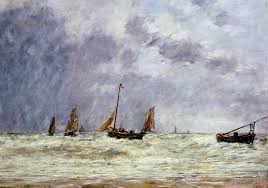 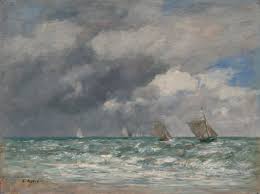 Berck, The Departure of the Boats 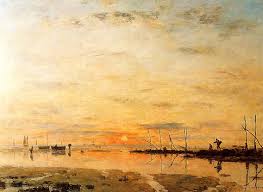 
Ciwt personally likes how the seaman in him is always aware of the direction of the wind.  And the way he captured it with fluttering flags.