There's a new (first and probably only) movie out about Bob Weir who, along with Jerry Garcia founded The Grateful Dead. CIWT readers know Ciwt missed the Dead days but is a fan of Furthur founded by Bob and another original Grateful Dead member, Phil Lesh.*  So has enjoyed reading about the movie which premiered at the Tribeca Film Festival on April 23 with Bob (actually called Bobby by virtually everyone) in attendance.

She particularly liked learning the following:

The Dead sometimes had mixed feelings about Deadheads.In the film, Weir expresses ambivalence about the fans who followed the band around: “If it rings those lofty bells for them, what’s wrong with that?” he says. “At the same time, if it takes your life down, that’s another story…if you’re a kid and you want to spend a summer on the road, that’s one thing. If you’re selling drugs, I have limited sympathy.” For (Director Mike) Fleiss, who attended over 200 shows himself, those comments came as a revelation. “There was an assumption that if you had seen 250 or 300 shows and never missed a show in three years, that was a badge of honor,” he says. “But the band saw that as a slippery slope and not necessarily a good thing. Bob talked about that. That was fascinating to me.”Read more: http://www.rollingstone.com/movies/news/8-things-we-learned-from-the-tribeca-film-festivals-bob-weir-doc-20140423#ixzz2zwUF1DnR Follow us: @rollingstone on Twitter | RollingStone on Facebook

But (Director Mike) Fleiss said the challenge of getting the legendary Weir to talk about his achievement was the hardest part of making the documentary. “He doesn’t like to talk about himself. He doesn’t trust pride and thinks it’s illegitimate. He’s the most humble rock superstar that has ever lived and will ever live.” ....*

It was in these early days of the Grateful Dead that Weir says he struggled to figure out his role in the band. “Usually, rhythm guitar was played by a guy who was singing who didn’t have time to play lead at the same time, so it was pretty simple stuff,” he says. Out of his desire to complicate the role came the unpredictable, improvised riffs in performances that became a hallmark of Grateful Dead concerts. “Every night, every song. I tried not to repeat myself. I had to keep improvising. It kept my mind real busy. Playing on stage was practicing and learning, as well as performing. You can always bring a sense of adventure. You can always make it more complicated, so that’s what I did.”....*

“Looking back, I guess I’ve lived an unusual life,” Weir says in the film.*


The movie does not seem to be a probing biographical documentary. (He's a nice, extremely talented guitarist and man; what's to probe anyway?)  According to celebstoner.com, it "hails Weir as a psychedelic rock pioneer who deserves more respect and appreciation from those outside the Deadhead world (they, of course, adore Weir and affectionately call him 'Bobby')."

Ciwt too!  And she'll be in her seat when the film comes to San Francisco. 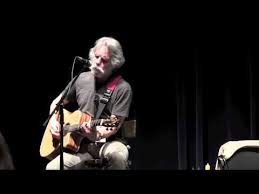 The Other One: The Long, Strange Trip of Bob Weir.