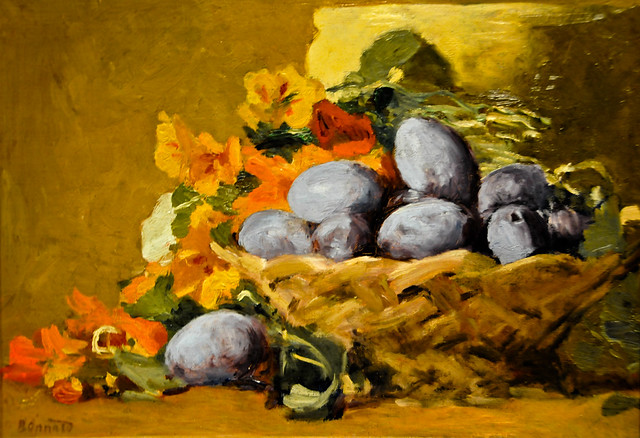 
The title of this wonderful, small painting now hanging at the Legion's Intimate Impressionism show brings Ciwt to thoughts about how works of art are titled.  Immediately upon seeing the painting, the person next to her at the show remarked "Those plums are blue." "Some of the nasturtiums are red, but those plums are blue."  And he was right.

So, why red plums?  The skin of some red plums does get bluish, but the plum meat is visible oozing a bit from the bottom left plum - and it isn't red.  Impressionists played with color, and Bonnard consistently worked with enhanced colors.  Perhaps he playfully designated the plums red. Bonnard was no stranger to playfulness, and prolifically produced fabric and furniture designs, puppets for puppet shows, painted screens, stage sets and illustrated books.

Or maybe some dealer titled the painting. Many if not most works of art are untitled by the artist. This even includes Leonardo da Vinci's Mona Lisa which received its title 31 years after the artist's death. This happened when the Renaissance art historian, Giorgio Vasari, wrote in his 1550 biography of Leonardo, "Leonardo undertook to paint, for Francesco del Giocondo, the portrait of Mona Lisa, his wife."

Sometimes artists give works preposterous, obscure, detracting, 'unsalable' titles which are later changed by dealers or owners of the work.

But often, the artist just calls it as he/she sees the subject. If this is the case,  Bonnard's plums really were red ones.