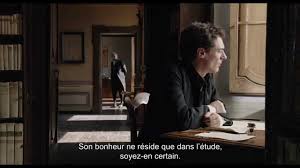 The movie, Leopardi, 2 1/2 hours with an illness-racked, deeply pessimistic 19th century poet-philosopher-genius was amazingly absorbing for Ciwt today.  This was due in part to the superior acting of Elio Germano in the lead role and virtually every scene. And in even greater part  for Ciwt to the entire movie being shot in historic, sumptuous, beautiful Italian locations: Racanati, Florence, Naples.

If Ciwt were Italian, she would probably know all about Giacomo Leopardi (1798-1837) and be able to quote his beloved, lyrical (and downer) poetry.  He is a literary hero there where his existential angst was fundamental to the intellectual formation of the state of Italy. His tomb was long ago declared a national monument.  For her part, Ciwt, as an uninitiated viewer, left Leopardi feeling there were many gaps in her understanding of the man. But this didn't matter to her all that much because she'd felt the movie's reverence for Leopardi and had been thoroughly engaged time traveling to romantic 19th century Italy.