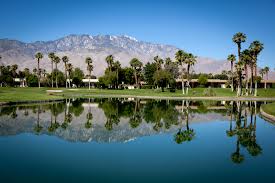 Ciwt has trouble taking Palm Springs seriously even though that's where she's heading off to tomorrow.  Her brother has a place there and it will be nice to spend time with him as well as getting reacquainted with the area.

Once upon a time she spent some time there with a boyfriend who had bought an old architect- designed mid-century modern house in the movie star Old Las Palmas section of Palm Springs.  As she remembers, Frank Sinatra's desert home was just down the block and the architect's name was Donald Wexler. Wexler pioneered the use of steel in creating flat-surfaced, industrialized residential buildings which were way ahead of the current time and contrasted so dramatically against nature they were photographed extensively and became enormously popular.  Wexler is probably best known for his Alexander houses which he designed for developers George and Robert Alexander.

What Ciwt remembers best are two things: her boyfriend's anxiety/buyer's remorse (he sold within a frantic year) and hours and hours inside the house, the car or any place that was air conditioned. Because he had to be there in all months to supervise the near constant renovating, there were no escaping the hot months when the temperature was 80 by 10 a.m. and kept on rising to upwards of 108.  Until she looked at the weather in today's paper and found the article below*, Ciwt assumed Palm Springs was that hot all year round.  She's happy to find that's not the case, but a little nervous now herself because she didn't leave room for heavyish outerwear and hopes she won't come home with a cold.