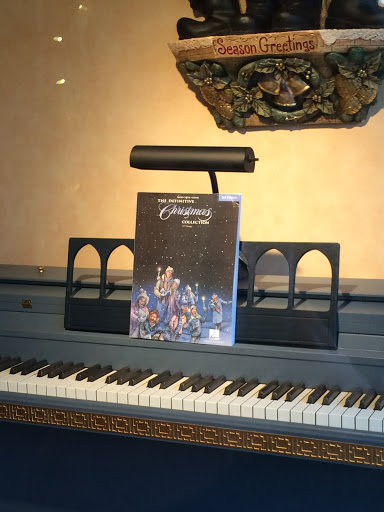 Even if it sold tarantulas and boa constrictors, Ciwt would welcome this little service-related shop on her way up the hill to her home.  All her hardware, mailbox, everday coffee shops are becoming high end dress, shoe and jewelry shops, the kinds that can - maybe - keep up with the exploding rents.

But this is a little piano store, and Ciwt loves that the owner is always changing the sheet music to reflect something about the times*.  So subtle. Today he has put The Intimate Christmas sheet music out and dressed Poland's greatest pianist and composer in a Christmas hat. 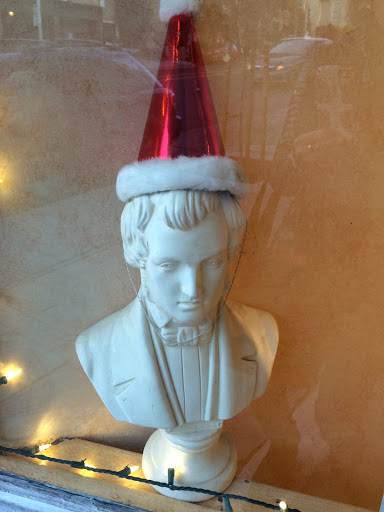 That, of course, would be

This prompts Ciwt to remind herself of some facts regarding Frederic Chopin (1810-1849):

The child prodigy published his first composition at age 7 and began performing a year later. By age 8 he was performing in the finest and most elegant Polish salons as well as writing his own compositions. At age 9, he made his public performance debut and enthralled audiences with his technical virtuosity throughout Poland, Austria, Germany and Paris.

It was to the latter city he moved at age 22 at a time when Parisian audiences were thrilling to the dramatic music of Schubert and Beethoven and were not initially moved by Chopin's delicate style. But early on he received a fortuitous introduction to the Rothschild family which opened many doors to recitals, teaching and greatly increased income. Those open doors eventually led in 1838 to French novelist George Sand and one of the most famous affairs in history.

Also one of the most ill-fated.  The two lovers spent a harsh first winter in the south of France in 1839 where Chopin contracted TB.  He was able to recover, move with Sand to her country home south of Paris and spend seven happy, lucrative years living a very elegant lifestyle and composing several of his most essential masterpieces.

But by the mid 1880's the affair and his health were deteriorating, the two became too proud to reconcile and Chopin's health and spirit were broken.  He made an extended tour of the British Isles struggling under an exhausting schedule and made his last public appearance in November 1848.  He then returned to Paris where he died at age 38.  His body was buried there, in Paris, but his heart was interred in Warsaw, near the place of his birth.

Whatever the facts, Ciwt believes the musical geniuses - like Chopin - live closest to the sun.