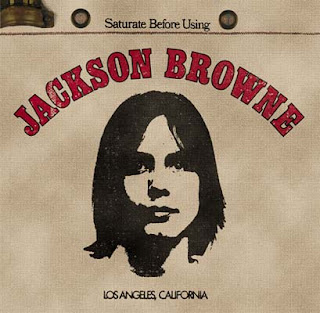 Ciwt was no hipster and didn't know much about who did the art for record covers.  But she vividly remembers the simple, straight-forward, almost architectural, look of this Jackson Browne album. She didn't really know Browne's music (It was Browne's (impressive!) debut album) so she bought it largely for the cover. Turned out the cover captured something of the essence of then 23 year old Browne and his music.  Ciwt ended up listening often at home and again and again and again on tapes during marathon road trips to Sun Valley.

A self-described 'bad boy,' he also got himself in occasional trouble for his art work. One year, for his cover of Richard Pryor's album, Roots, Burden reported he "..got two letters. One was a letter from the National Geographic Society's attorneys offering to sue him for defamation of their publication.  The second letter was a Grammy nomination for the best album cover."

A very 60-70's combination.  Burden did very well by his clients indeed in a career he, also in 60's style,  stumbled into.