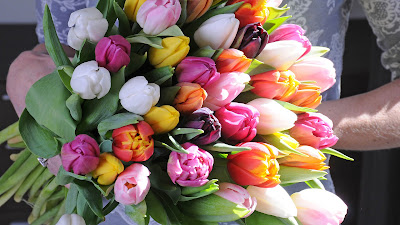 While she was watching Daniel Day-Lewis yesterday, Ciwt was sorry to have missed the First Annual American Tulip Day right downtown on Union Square. As her followers know, tulips are right up at the top of Ciwt's List of Favorite Works of Art. If she had to choose from a created work, a Matisse painting and a natural one, a vase of fresh tulips, she's not sure which direction she would go.

Now the financially unattainable Matisse of course, but once upon a time those tulips would have sold for more than a Matisse would fetch today.  In the Netherlands during 'tulipmania' (ca. 1634-1637) and well before Matisse, promise of a single tulip bulb might have been enough to secure a mansion on one of Amsterdam's canals. "Promise" because people didn't have actual tulip bulbs in hand during the mania. What the "owner' bought was a piece of paper that gave "Proof of Ownership" of a tulip bulb that was apparentlygrowing in a field somewhere. And that Proof of Ownership paper could be sold to someone else, then someone else again at an increasingly higher, virtually limitless price. You can begin to see the problem; sadly most tulip 'investors' lost everything.

But the flowers are so beguilingly beautiful, Ciwt can understand wanting to 'own' them - in bulk.  The most sought after and therefore expensive were the striped

varieties.  Luckily Ciwt prefers the solid colored ones - so maybe she would still have had a little of her money when the tulip bubble burst.

All the better to pay her fare into the movie theaters so she could watch with (some) interest hour after hour of Oscar presentations over the years.  The Red Carpet  pre-pre-ceremonies begin soon for this year's epic.  If time is money, she has a huge investment in the Oscars and doesn't want to miss a minute.