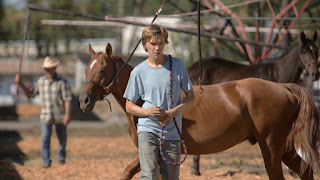 Charlie Plummer in Lean on Pete

Havng totally missed the message on Daylight Savings TimeCiwt arrived sleep deprived at her cinema club this morning. The film they screened Lean on Pete portraying grim, downbeat, interior loneliness did nothing to perk her up. She's never been a fan of 'down on America' anything. But she can't say conclusively "Don't go" because 15 year old Charlie Plummer - who is in virtually every scene - does a remarkable acting job. Plus the (young) critics so far and many members of her cinema club have given it very high marks. Is it bedtime yet?
Posted by Ciwt at 7:14 PM