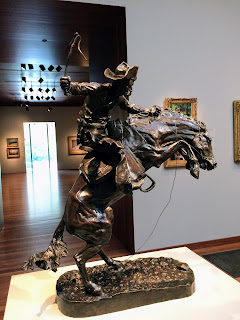 This is 'cowboy artist' Frederic Remington's first attempt at sculpture.  Pretty talented, yes? Both cowboy and horse are accurately sculpted.  But its also a little inauthentic. Remington was a master of portraying horses and riders, having painted them for years, and he created the sculpture at his suburban New York home using models and studio props.  Truth told, by 1895 the Wild West was well over.  For instance, 1895 is the year the de Young Museum opened in San Francisco.  Less 'wild' yet, thousands of operas had already been performed here since 1851.

But, that didn't stop sales.  Remington's edition of Bronco Buster was a sell out except for the one he reserved to give to his friend, Theodore Roosevelt.  When he was elected President in 1901, Roosevelt took the bronze with him to Washington and it is now a part of the White House art collection.