Walk: Hood in Drizzle (any moisture is welcome)

Ciwt was reminded today of this favorite book from her youth, well her younger years at least.  James Herriot's compilation of heartwarming stories is based on the people and animals he met during his early years as an English veternarian. 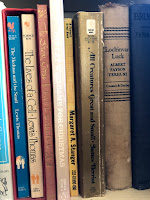 Now that it has become a massive hit both in bookstores and on television and the big screen, it is quaint to recall it actually had quite a sleepy start.  In England at the time of its publication (under another title), veternarian surgeons were heavily discouraged from writing books under their own names. To be published at all, James Alfred Wight adopted the Herriot pen name.  But, even then, sales were so slow his book might have died there if an editor from St. Martin's Press New York hadn't believed in it.  And when it was published in the States in 1972, it took off with far less than best seller momentum; Ciwt remembers being told by a friend about it, and then she told one or two friends, and so on and so on across the country.

At this point who isn't acquainted with and fond of Herriot's creatures, towns and townfold and who won't be happy to hear that PBS is bringing back a new 7-part series this Sunday?
Posted by Ciwt at 1:32 PM