On select Sunday mornings in eight different cities this fall, we will preview and discuss the best new American independent and foreign films of the season. Always a secret until the day of the screening, our movies are shown before their local release, letting our members view and respond to them with true surprise and spontaneity.

After each screening, our distinguished moderators – local film experts, professors and critics – will lead a forty-five minute discussion with club members directly in the theater. At many of our showings, our moderators are joined in discussion by fellow film scholars, esteemed film critics and occasionally filmmakers themselves.
Our distinguished group of programmers have been guiding film societies, academic programs and even popular film festivals for over a decade. We attend dozens of leading festivals around the globe, always keeping our eyes open for the next Cinema Club gem.
I've enjoyed the experience a lot.  Many of the audience/club members make supremely cogent comments (which I could maybe do hours after the film and to just a few people instead of directly after the film into a mic to the several hundred who are at the screenings).  The moderators are outstanding.
Today's film was a documentary about a well-known case of false imprisonment for murder of three (then) young men in Memphis, known now as The Memphis Three.  Their story was entirely new to me and my stomach was clenched for almost the whole movie.  One personal reason is that as a child I had a Terror of any kind of entrapment by authorities, any kind of imprisonment.  My trust factor in such a situation was (and probably still is) zero.
The discussion after the very intelligent and riveting film was co-led by one of the usual moderators and a few lawyers who specialize in representing innocent prisoners pro bono.  Believe me, my childhood fears were well founded.  Possibly more another day; it's still sinking in.
Through the Cinema Club 'surprises' I've seen many films I might not have gone to in the theaters.  All 'indies,' almost all excellent, and certainly, definitely to a film consciousness/ciwt expanding. 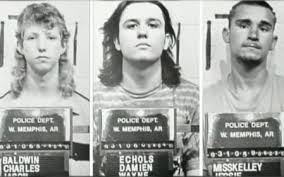