My Amazon order of Lives of Great 20th Century Artists by Edward Lucie Smith just arrived.  Some people (vastly different than me) like to leaf through cookbooks whereas this book is my type of intriguing compendium.

Seeing it puts me in mind of going to the Paley Collection show at the de Young with a fine arts painter and our different takes on the art we were viewing.  Standing in front of a Cezanne masterwork, she said something about how the whole painting was directed toward a small church center left.  I was kind of shocked because I noticed the 'usual' stylistic qualities for which Cezanne is known: flat perspective, using brushwork and color to make geometric forms which construct his scene. But it hadn't occurred to me the picture was "built' toward the small church.

So I said something about how Cezanne was commenting on scientific theories of light and physics that were just making their way into the late 19th C. intelligentsia.  She didn't have much to say about that and returned to some more comments about how Cezanne had actually painted the work.

I then said something about his supposedly brutish mentality.  And on and on we went, never really finding much common ground in the aspects of the work we were resonating to.

This interested me, and one conclusion I came to was that, as an art appreciator and one time art critic/reviewer, I was personally interested in two things.  One my overall aesthetic take on the art.  And, two, facts (tidbits really) about the art, artist, historical period - or hopefully all those and more - that might make an art review lively and engaging to the reader.  The actual structure of the piece - while an integral and important aspect of a valid review - I don't believe makes for interesting copy in itself.

But I could see from her comments that structure, technique, brushwork, type of paint, where it failed or succeeded along these lines, etc. were really the only aspects her art creator mind was called to.

Interestingly, things reversed later when we were talking about books.  She enjoys facts about writers' lives - which I too find interesting.  But mostly I read for content and, primarily beyond that, for how and whether the writer painted his/her verbal scene. 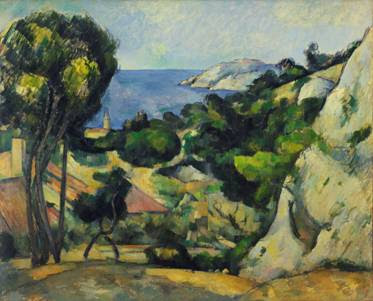