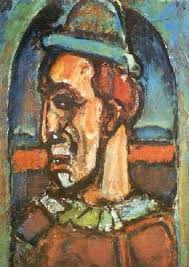 The works of the William Paley collection presently showing at the de Young Museum concentrate on the 'modernist' period, a hugely imprecise term that includes art from around the 1850's to the 1970's.  This show concentrates on the time from post-impressionism @1890 (Degas, Rousseau, Lautrec, Gaugin..) through Fauvism (Matisse, Derain, Rouault) to cubism (Picasso - also shown in earlier periods- Gris and Braque).  It is a powerful show in many ways, one being a show of buying power by one hugely powerful early CBS founder and top broadcast executive, William Paley.  Every piece on display is exceptional with a few being exceptional masterpieces, and we are lucky to have the assemblage - which is usually dispersed throughout MOMA -  here together in San Francisco.

One surprise of the show for me was an entire wall of Rouault paintings. (Georges Rouault 1871-1958)  His dramatic paintings with intense, stain-glass like colors and thick black outlines always stand out, and I know I've seen a work or two or three in several museums over time.  But I don't remember seeing so many of his paintings in one place, in this case in one collection.

A fact that I learned at an art lecture may account for this, and I believe is corroborated by this sentence from one of Rouault's biographies: Encouraged by his art dealer Ambroise Vollard, he concentrated on graphic art between 1917 and 1927. One of the most famous series of this period is the extensive cycle 'Miserere' which was finished in 1927 and published in 1948. (N.B. - 21 Years between completion and publication).

The fact to which I refer is that Rouault's dealer mentioned above was said to have gone to Roualt's studio on a regular basis and bought every painting he saw each time. Eventually Vollard paid the abjectly impoverished Rouault a salary to paint and even established a quiet, clean studio on the top floor of his own house while shortly before Rouault had been living and painting in a rat-infested slum in Versailles.  Vollard's strong patronage and salary must have seemed an enormous blessing to Rouault at the time allowing him to make a living and continue as a painter.  But his exclusive contract with Rouault also allowed Vollard to essentially corner the market on all Rouault's works - paintings, prints, illustrated manuscripts and whatever else the artist produced.

And, in the long run, Vollard's patronage was was no blessing at all for Rouault. If the fact I remember from the art history lecture is true, Vollard is said to have completely withheld Rouault's work for 20 years (!).  In 1937 when he did release the Rouault works he owned, the modernism market was totally established, commanding huge sums and Fauvist works were rare and at a premium. In that year forty two paintings all in a style which was "relatively 'new' for critics and the public but long established by the artist himself"* more or less blew the minds of viewers and Rouault's reputation took a great stride forward.  The long-withheld Rouault works were literally gobbled up by wealthy collectors such as Paley - who perhaps was given first dibs by Vollard, as dealers usually do for prominent collectors.

So, who capitalized on Roualt's art?  In this case Vollard and Paley as well as the other collectors Vollard sold to.  Rouault's original monies from Vollard were a pittance in the long run. But ironically Vollard was killed in an accident in 1939 thus releasing Rouault from his financial contract.  Rouault then prevailed in a lawsuit against Vollard's heirs and reclaimed his unsold paintings.  In the 1950s, what had been a trickle of retrospective exhibitions became a flood, and when Rouault died in February 1958, he was given a state funeral.

But at a higher level, Rouault was cheated out of his career:  His art was barely seen compared to the number of works that could have been encountered by other artists and collectors. Hence his work never really entered the "dialogue" or "conversation" of art.  Few other artists within and outside of France could be influenced by him or could comment on him either in their art or in actual conversations among themselves or with Rouault directly.  If this had happened, Rouault may have gained a greater reputation, or may have grown in reaction to critiques by other artists and critical reviews.  He may have had many stages in a career that, as it happened, was visually quite consistent from beginning to end.

When Rouault recovered his paintings from the Vollard family, he burned 315 of them in front of witnesses.  I can't help but wonder or think this rage about what his career, life and even spirit (Rouault was highly religious and spiritual) could have become if not for Vollard's greedy, covetous withholding was much of what propelled Rouault toward this massively destructive act. 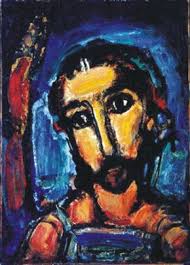 * I've located a biographical article on Georges Rouault that corroborates and fleshes out the little piece of information I picked up at the lecture: http://www.artchive.com/artchive/R/roualt.html