One of the things I like about myself and have worked on/valued my whole life is that I am courageous.  The other day I googled "Courage" for the reasons we all google, and again and again found references to 'manly courage,' 'courage and manliness..' and all the quotes about courage were by men and about men's activities.  Finally I googled 'Is courage feminine?' and still all the references were to from for and by men.  Vis-a-vis courage, women were said to show it by their passivity, by their willingness (or something) to rely on men.  Men are courageous and go to war but women don't is one consistent idea about courage.

Well, I personally, female, would take a bullet or go to war for several things, values and beings that are absolutely dear to me.  And as I said, I am self-identified with and have striven my whole life to be courageous.

It is at least a week later, and I am still so appalled by this relegating of such an import human quality to men that I can't wrap my mind around it. I want to express my feelings and thoughts about this, and maybe I will.  But maybe they are best expressed by just putting this 'google' discovery out there and letting people form their own thoughts.

Other "Manly Virtues" I encountered are: Industry, Resolution, Self-Reliance, Discipline and Honor. (I'm sure there are more). All of these constitute Human Character as far as I'm concerned. I value them for myself and in others - men and women. 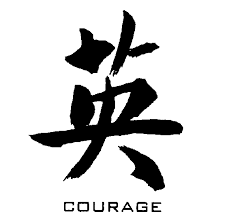 *Virtually every image in Google Images relating to Courage is also male.  Check it out...
Posted by Ciwt at 5:44 PM