Went to a documentary on Tony Bennett, The Zen of Bennett, and unexpectedly walked out of the theater with Amy Winehouse on my mind. The majority of the movie captures his recording sessions with some of the artists he sang with on his "Duets" albums: Carrie Underwood, Willie Nelson, John Mayer, Aretha Franklin, Lady Gaga and others.  I'd say see the movie for the depth of Bennett's talent as well as calm and for some footage of famous musical people in recording room settings.

Bennett's apparently perfect calmness created a shockingly stark contrast with Amy Winehouse in a long segment of the documentary.  Standing at her mic near Bennett's she has a feral quality, animal quickness and instability only tangentially bordering on self-regard or even humanness.  She is riveting because, truly, you are almost afraid of what she might do in the next moment.  Her energies are both intense and barely bridled.  She is someone you want to be very wary of  and at that same time reach out and nurture.  She's just in So Much trouble.  But when all that trouble, unpredictableness and creativity harness themselves to her musicality, even Bennett is stunned. He knows he's in the presence of that rarest of commodities: true artistry, artistry so pure it roars out of the voice like a wild bull, relentlessly charging into the unknown even in a recording session. Each take is utterly unique from the one before.  Jaw-dropping, and you can see his do just that.

Outside the recording studio Bennett also knows Winehouse idolizes him and that she's "hooked on" drugs.  But in this his calmness fails him utterly; there is no way he can possibly comprehend the level at which her whole chemistry/being is involved with multiple drugs and destructive behaviors*.  He makes the mistake most do and thinks he can 'talk to her,' 'tell her to watch it,' 'tell her to stop before she gets hurt..' Might as well tell it to a hungry lioness devouring prey.

He is devastated, bursting into tears hearing about her death.  The movie is dedicated to her.  Through his eyes we are able to hear and appreciate her enormous talent - something that went past me in all the sensational even violent notoriety that surrounded her.  The world lost a deeply original talent, but looking at her in the movie, you know what Bennett apparently couldn't quite comprehend: she was a very fragile, very maddening, very temporary visitor. 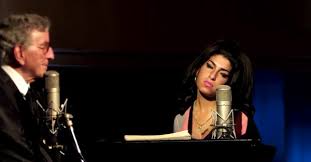 *It's a day later now and I've read a bit more on Bennett (and Winehouse).  One of the most interesting facts about him vis-a-vis this blog as well as the whole movie about his 'zen' is that he nearly died of a cocaine overdose in the 1980's.
Posted by Ciwt at 6:31 PM