Went to A Royal Affair after teaching this afternoon. Here right out of Wikipedia is a little blurb. The story is set in the 18th century, at the court of the mentally ill King Christian VII of Denmark, and focuses on the romance between the queen and the royal physician Struensee.

Didn't really know anything about it except that it was a good alternative to Lincoln whose showing times don't work with my schedule and which I'm not quite prepared to see. (Know the acting will be Outstanding but am pretty sure I'll find the movie itself a bit stultifying).  Anyway, back to the movie I did see, it portrays an episode of Danish history I knew nothing about in a very compelling - even suspenseful - way.  The acting is uniformly excellent, and I particularly like the authenticity of the castle and exterior settings.  It carried a very real feeling of being there in the late 1700's, and I felt involved, informed and once again reminded why I would not want to be a royal..

Oh, and in and of itself, here is a Huge reason to go: 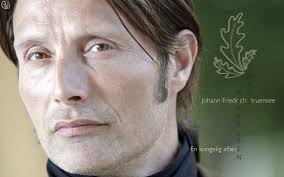