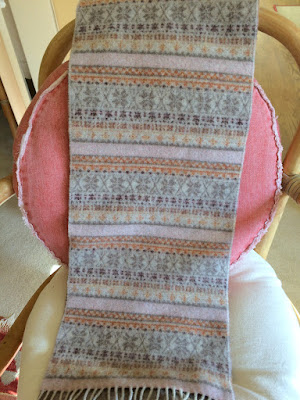 Ciwt's downstairs neighbors brought her a scarf from their vacation home in Northern Scotland.  When she saw its lovely soft colors and felt its hand she was also struck by the sense of Scandinavia this Scottish scarf imparted.  So, off to research went Ciwt.

The scarf is from Fair Isle, knitted in the Fair Isle technique.  Fair Isle is a tiny island north of Scotland where the Atlantic meets the North Sea and where there would have been a combination of isolation and trade routes.  Because of the former, the intricate techniques and patterns were allowed to be perfected over many generations.  And because of the latter, Fair Isle knitwear gained exposure and popularity far beyond the tiny jewel of an island.

The history of the Fair Isle patterns are either intentionally secret or just unknown.  But to Ciwt it stands to reason that with the northern parts of seafaring Scandinavia being so close to Scotland, and Scandinavia in turn being so close by sea to European Asia (Russia), there must have been much merger of design patterns among all those countries.  There is a also a rather romantic myth that a Spanish Armada ship, the El Gran Grifon, which was shipwrecked on Fair Isle contained Moorish patterned textiles, and the women of Fair Isle set about developing techniques for making these patterns their own. Whether Spanish or Baltic or some other region, it seems highly likely that a piece of patterned knitting was bartered into the isle from a passing ship in return for fresh food and water. And equally likely that the Isle women were already skillful producers of plain knitting and capable of eventually developing the patterns into a unique form of two-handed knitting.

When she realized her new scarf was Fair Isle knitwear, Ciwt was a bit surprised she hadn't known right away from memories of prep school days.  But, that mystery was soon solved:  The term 'Fair Isle Knitting' has come to be generic and is used worldwide to denote any form of multicolored knitwear.  However Ciwt's authentic Fair Isle scarf has its own distinct presence - so rich, thick and soft it stands completely apart from its imitators.  Fair Isle Knitting is truly and recognizably an art form.* 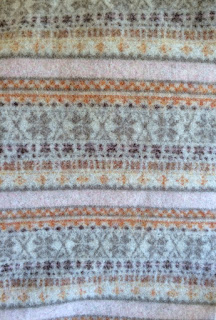 *For those knitters of you interested in learning the technique, go to  https://www.philosopherswool.com/Pages/Twohandedvideo.htm
Posted by Ciwt at 6:56 PM