You know those little things to others that are phobias to you?  Ciwt's father couldn't eat if any of the foods on his plate touched each other. (brumotactillophobia) Her best friend growing up was terrified of all spiders. (arachnophobia) For Ciwt it is rats (musophobia) and, in a milder form, succulents.  Yes, those drought resistant favorites of many which are becoming more and more prevalent as the rains continue to determine our plantings.

Ciwt  sometimes comes home and looks out the window to find that Andy, the gardener, has planted yet more succulents.  Through the glass she sees they start singular, small and unhealthy looking. 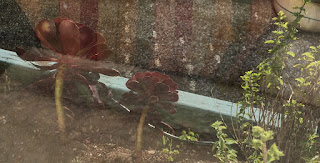 .  Good!  Ciwt waits for them to die their natural deaths.  But, instead, they get bigger and 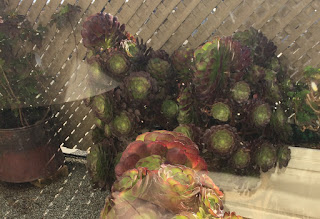 heavier and start sprawling out over the edge of the planter box and lumbering across the roof, growing and growing.

It gives Ciwt the creeps.

There is also the problem with the waxy, smooth surface.  It causes Ciwt the same nauseated visceral response as those glossily, slithery Dali paintings do .*

So today she asked the young man who is repairing her deck to take away one of the largest succulents. She feared he would be judgmental, but he was delighted because he and his wife love succulents. AND, turns out, all you have to do is stick them in dirt and they will begin regenerating themselves. (Gawd! But they are happy).  So, it was a win-win.  The succulents (a few at least) are all cut, packed up and ready for a burgeoning new life - Elsewhere!