So, yes, of course Ciwt got herself to the Turner show* (see previous CIWT) almost immediately after it opened and very late in the day where she hoped to have it mostly to herself.  With those moody skies of his, it feels so appropriate to commune with him at a time when the natural world is immersed in either sunrise or sunset.

Of course there was much to think about and probably more later on JMW Turner by Ciwt.  But today she enjoyed just seeing what spoke to her.  And it was the details.  You just know Turner knew the devil was there.  Along with the sweeping epics, historical and mythological.  The play between them, which Ciwt felt was also a play in Turner's mind.

A highly intelligent man, Turner was truly attracted to history (particularly English history), the grand, the dramatic.  He knew his famous sayings and often displayed them next to his paintings.   And of course he also knew history paintings had classically been considered the highest form of fine art and commanded the most prestigious following, reviews, conversations and dear prices.

But Turner was also a romantic who loved his long walks in nature.  Who loved the sea, the hills, the animals, the entire landscape beauty which surrounded him (but was not - yet - considered admirable subject matter).

So what Ciwt enjoyed today were the little, intimate, natural details that so humanize even his most monumentally epic paintings. 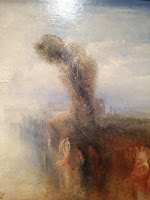 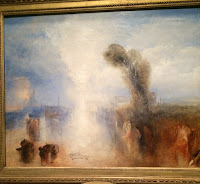 this mythological painting.  Or the goats 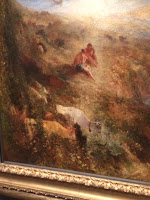 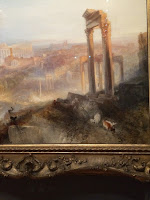 in small front corners of larger canvases.  And then there was that snake 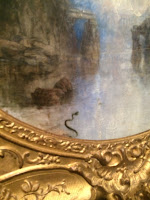 and the expressive sails 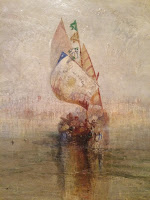 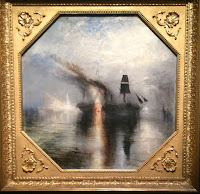 No matter how enormous the subject matter and scene, Ciwt always felt personally involved because of these touching, real life images that spoke to her and also spoke of Turner's love of nature and the the dignified intimate.