Update on my tennis viewing thoughts (2/238).  Billie Jean King was recently interviewed on NPR and asked her thoughts on the state of men's tennis.  Her thoughts were all complimentary about the level of the game (I agree!) but, interestingly, she thought the men's matches should be reduced to 2 out of 3 sets - and the women's increased to 3-5 (reversing the current and long-standing convention).

Her thought was it will save the men's bodies; they'll be able to compete longer and the public will be able to watch them longer.  The current game is so demanding on their physical bodies, it wears them out too early. (Apparently women's bodies with their padding or something are actually more suited for longer matches). Also in an extremely high percentage of the matches, the person who wins the first set wins the match.  Why put them through an additional 1-2 grueling games when they have a probable winner?

The interviewer commented "Yes, and really, two hours is quite enough entertainment."  Ie, others besides ciwt get a bit bored/antsy to do other things than watch after a while - especially since there is the awareness of the 1st set winner usually being the match winner.

Probably the changes won't/can't be executed, but I was interested that others were thinking about whether it is time to do something/make some adjustments.

Meanwhile, congratulations to Rafa Nadal for incredible play.  Can't remember Billie Jean's words but she said something about Nadal playing far beyond all possible expectations/belief this entire year.  (And this is Billie Jean King's assessment! She also says she believes Serena Williams will go down as the best female tennis player and even now, along with Gonzales and Sampras, has the best serve in the history of the game). 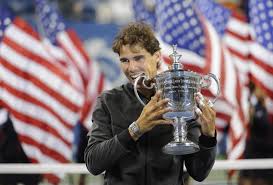