This evening a docent friend in Berkeley is going to the movie The Vogels 50 x50.  I can't attend but it reminded me of the Herbert and Dorothy Vogel's amazing and heartwarming art collecting story.  Heartwarming because they were both New York City civil servants with sincere and deep interest appreciation for art. After trying their hands at actual fine art classes, they turned instead to collecting.  This on virtually no money but with extraordinary art vision.  The artists they began collecting were largely unknowns, just producing works that genuinely spoke to the Vogels.  To aquire the art and support the artistss' endeavors  they made any number of financial arrangements with the artists they liked - and often became their friends.

Once, for instance, Cristo traded them a collage in exchange for cat-sitting.  If you know the famous environmental artist, Cristo, you now know that the Vogels had literally a Midas touch. Their collection of post-60's conceptual and minimalist art is regarded as one of the most important in the United States.  But their story continues to be heartwarming because, after bring their art home on buses and taxis and keeping it under beds and around for their enjoyment, they eventually donated it - the entire priceless collection - to the National Gallery of Art 'because it doesn't charge admission or sell donated art and because they wanted their art to belong to the public.  Wow!

It is just a wonderful, special, unique art story - one well worth knowing -and the movies that document it are as well. Wikipedia's entry on the Vogels is a short and lovely read:
http://en.wikipedia.org/wiki/Herbert_and_Dorothy_Vogel


Dorothy and Herbert Vogel at home. 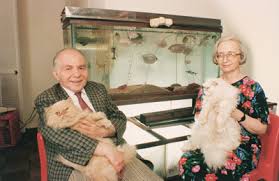 They named their cats and fish after artists.