The US Open is in its final rounds, and I miss watching tennis.  Not because it isn't televised.  The Men's Semifinals were today, the Women's Finals tomorrow and Monday will be the Men's Finals. All on television at watchable times.

But if I see the men's matches at all it will just be for a few minutes here and there to keep abreast. Even in the tightest matches I'm mostly just interested in who won and not in watching the points.

This is a game, the men's singles especially,  I used to watch - point by point - for hours.  The variety of shots and strategies were riveting.  Chops with odd bounces, drop shots, overheads, amazing performances with one or even both players at net.  It was intriguing, like a thriller; you couldn't be sure what trick the well-rounded players might pull off their rackets from moment to moment.  The players didn't just outlast and overpower their opponents; they outfoxed them!  And in this they were usually graceful, lithe.  The cagey game was quite balletic, light, bouncy, swift. Federer it seems is the last of this breed; remarkable for bringing a beautiful game to a powerful game - and being the Champion for so many years.

More and more now the game belongs to the mighty, the powerhouses who can stand or run back and forth at the baseline executing and defending shots so fast they would damage most people's wrists if they could get their rackets on the ball.  Rallies go on and on at this ferocious pace.  Shot after shot long, huge and every player running like mad to get themselves to balls most of us would have a hard time even seeing.  Long rallys go into long games and long games into long sets and matches go on for 3,4, 5 hours, often finally settled by tie breakers.  There are no real surprises, not utterly unexpected, clever shots.  The winner is the prevailer, the outlaster.  And it just isn't that interesting to watch.  Kind of like watching a marathon being run, not that interesting as I said. 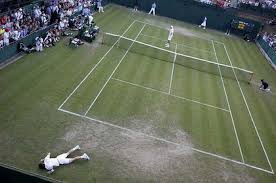 I suppose, hope really, the next level will come when these powerhouses also have to be extremely cagey. When the next champion becomes a player who has great variety in his shots and consistently puts them into practice. The powerhouse with the slice serve that runs in, executes drop shots, then hangs high wobbly volleys in the air or just generally shows up in an unexpected place in the court with an unexpected shot.This will force the rest of the contenders to start varying their huge games. 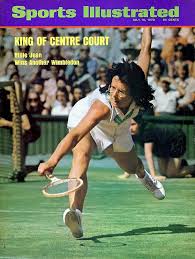 And hopefully, once again tennis will be remarkable and exciting to watch from beginning to end.