Walk: Cinema Club (The Lady in the Van)
Distance: 2 miles and home yoga 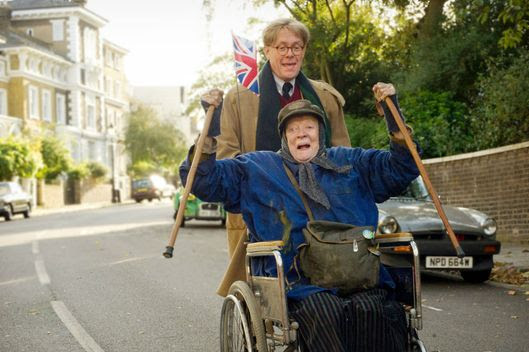 
"Not everyone recoils from The Lady in the Van the way I do." David Edelstein, Vulture

Copy that, David.  Just looking at the promotion pictures, like the one above, and enduring the previews when she went to other movies have been enough to make Ciwt recoil.  She would have walked a mile to avoid this movie, but, as luck would have it, she walked a mile (in the morning, in the rain and cold) to see it.  The Lady in the Van turned out to be the season finale of her Cinema Club's Fall season.

Ciwt respects the club, its terrific moderator and highly intelligent and informed audience, so she stayed for the movie.  The good news is Dame Maggie Smith's acting.  One reason Ciwt wanted to avoid the movie was what she thought would be a predictable performance by Smith, excellent but snippily predictable.  But, no.  Smith was the opposite of predictable and the entire reason to see The Lady in the Van.  Smith gives it all she's got, and that's saying a lot.  She plays her Lady in the most wide ranging way, unlikable, sympathetic, pridefully paranoid and essentially unknowable throughout, original, mad as an arrogant, bedraggled hatter.  Ciwt couldn't take her eyes off Smith, even though she dearly wanted to.

Other than Smith, the movie, based on a play, loosely based on facts felt middling to Ciwt. Intelligent in an ambivalent and Twee way.

PS - Lady in the Van is the second movie in the row (the first being 45 Years a couple of weeks ago*) where Ciwt has had the opportunity to see legendary actresses - extremely beautiful in their youth - command the lead and their films.  Both Smith and Rampling have aged with the minimum of cosmetic work (if any) and in public and now in extended close-ups on film.  Ciwt thinks this very strong, courageous and so admirable.  (As well as unusual)