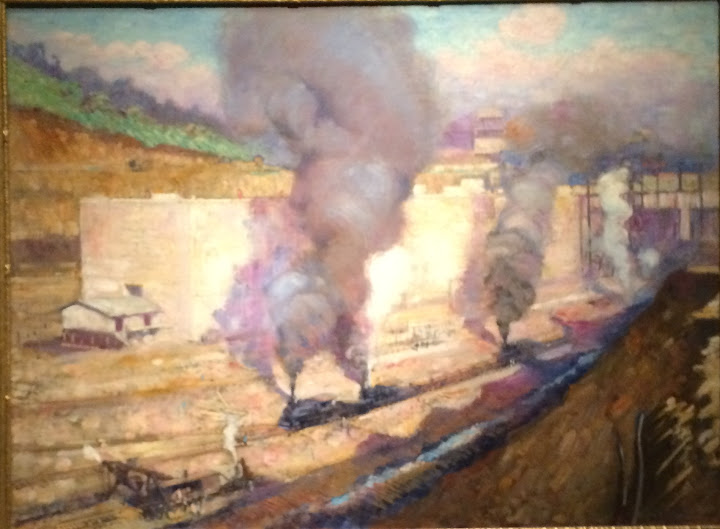 Many cities have those 'historic places and/or events' they often tout but locals fail to attend or learn much about.  For instance, the Foshay Tower, the tallest building in Minneapolis.  Ciwt grew up around there, heard the tower mentioned at least daily on the news or something and never went to tour it.  Nor can she think of anyone she knew who did. (As proof she can cite last night's Jeopardy question about Foshay and his tower which all the contests And Ciwt missed.  Ho hum).

Out here in San Francisco we have several historic happenings and places, one of which is the Panama-Pacific International Exposition (PPIE).  It ran from February to December 1915 and is celebrating its centennial this year with, among other events, an art exhibition at the de Young Museum.  Having worked in the local art world as well as briefly for Golden Gate Park (location of the de Young), Ciwt has heard (enthusiastic) talk about the PPIE for many years, glanced at numerous pamphlets, posters, books and prints.  She has also been aware of the size and splendor of the undertaking which covered over 630 acres of what now comprises the Marina District with gorgeous architecture in a variety of styles according to the country which erected them.

But has she cared?  Not really.

Not sure why.  For one thing, she's just not a World's Fair type person - not in Montreal, not in Seattle. Not a parade or spectacle person either.  And there are certain things she has simply been remiss about, like going to the Statue of Liberty when she lived in New York. Also, taking herself off the hook, when looking at or hearing about one era from the vantage point of another, it is often difficult to recapture the excitement, energy, impact of the celebrations and controversies from that previous time.  (Case in point, the outrage and scandal precipitated in Paris by the first Impressionist salons. Can you really grasp that when Impressionism today is the most universally loved painting style?)

Anyway, Ciwt finally paid proper homage to the PPIE today at the de Young and got a truer sense of the look, scale and import of that truly remarkable undertaking. She made many (mildly to tell the truth) interesting discoveries, one of the first being the connection of the PPIE with the completion of the Panama Canal.  In fact celebrating the completion of the Panama Canal was the ostensible purpose of the fair. But it was widely seen by San Francisco civic leaders as an unparalleled opportunity to invite the world to San Francisco and showcase its recovery from the 1906 earthquake and desirability as a cultural center and magnificent place to visit.

Particularly knowing about the numerous hazards involved with constructing the Panama Canal (including the fatal outbreak of malaria caused by the tse-tse fly), it never occurred to Ciwt that artists were present.  But in fact a handful of intrepid artists were attracted to Central America to capture the spectacle of the massive project.  One of those was Alson Skinner Clark, whose painting is seen above.  Clark, an American expatriate then living in Paris, traveled to the Canal Zone in the spring of 1913 and completed onsite a series of colorful oil paintings.  No easy task at the time.  Eighteen of these were shown at the PPIE and earned the artist a bronze medal.