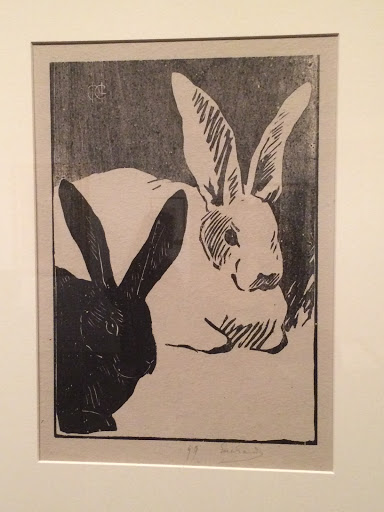 So now Ciwt has gotten herself back to the Asian Art's Looking East show for a personal look-see. What did she conclude?  Well, It's a very high quality show, broad-based from fine art to clothing, furniture, photography, the decorative arts. The signage is thorough and informative and the crowds it is attracting would be the envy of most museums.

What's missing for Ciwt is impossible to include.  It's the shock of the new.  Once upon a time, in about 1849 in Paris, virtually no one had laid eyes on anything Japanese.  The operable aesthetic was that of Louis XIV as it had wended its way through rococo, neo-classicsm.  It was F-r-e-n-c-h; if you wanted to be chic, in the know, you collected French, hung it on your walls, dressed in it, ate off it and sat in it.  And if you weren't chic, not adhering to the current French mot, well, au revoir to you.

Into this aesthetic stranglehold, slowly began to appear Japanese images: shockingly colorful prints with unheard of proportions and use of lines.  Shortly after the woodblocks came silk tapestries and kimonos with non-heraldic designs like butterflies, cranes, fans and lotus flowers. Then on other boats began arriving dinnerware, desk and table top accessories, screens.

It was all so Decorative and the rage was on!!  People of all classes were wild for the Japanisme; wearing it and collecting it became what status-conscious Parisians simply had to do.

The effects were suddenly everywhere from the new more fully realized and sensual view of women (more sexy in their kimonos), to the use of posters for promotion (the beginning of advertising as we know it)

, and certainly in painting which was already being transformed (into Impressionism) by new information about the science of light.

In our age, the Eastern aesthetic  - from food, to cars, to gadgets, to iconic designs and a host of other areas -  is one component in daily, globalized life.  So, while there is no shock in the Looking East show, it is interesting and informative to return to a time when the melding of East and West began in earnest.

*Perhaps because the show is tackles such a large and complex topic and includes so many excellent examples of Japanese and French art, Ciwt found herself most drawn to this print, one of the simplest images in the show.