The mini blackout that struck Ciwt's building (undelated to the recent Big Blackout throughout California) has passed.  To catch loyal CIWT readers up, here are some recent things she wants to tell you about.

James Tissot at the Legion of Honor Museum

Before going to the Press Preview of  James Tissot (1836-1902): Fashion and Faith Ciwt was fearing her eyes would glaze over from boredom.  But she found Tissot's mid-19th C. paintings of London and Paris haute society and Bible scenes (yes) to be more alive in person than in photographs. Up close his colorful, crisp, precise  observations of manners and fashion simmer with urbanity and undercurrents of sexual drama. And they certainly have found their perfect venue in the Beaux Arts Legion of Honor buiding, which is a scale model of the Palais de la Legion d'Honneur in Paris. 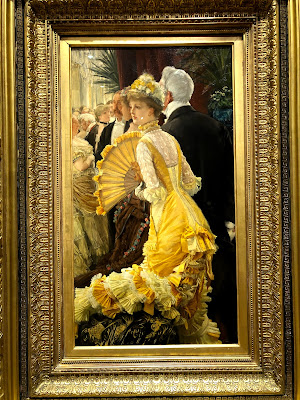 Ciwt was particularly struck by this double portrait of a gown and a lady.  She loves how Tissot not only captured the details of the fabric and frills but carried the warm, rich golden yellow throughout the canvas making it positively glow.  And she also loves the delicate full profile portrait of Kathleen Newton, Tissot's Irish muse, love and love of his life. Who might she be looking across at while on the arm of a considerably older gentleman? 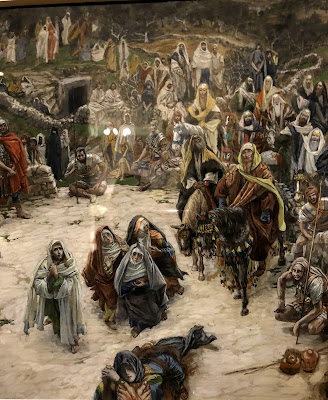 What Our Saviour Saw from the Cross, ca. 1886-1894,
Opaque watercolour over graphite on green-grey wove paper
(Brooklyn Museum, purchased by public subscription)

Sadly, Newton died of consumption at age 28, and that devastating event as well as a vision he experienced at the Churcho Saint Sulpice set Tissot on a vastly different, spiritual/religious path.
Attending seances, perhaps in hopes of reconnecting with his lost love, Tissot abandoned his former subjects, steeped himself in the New Testament, and made expeditions to the Middle East to record its land, architecture, costumes and customs.  All this and more in service of his ambitious project of illustrating the New Testament with historical and archaelogical exactitude.

Even on this path during which he painted over 350 watercolors, Tissot's eye for social interaction and drama was on full display.  Ciwt found his What Our Saviour Saw from the Cross to be shockingly original and can only image how the scene was first received by viewers when first presented in Paris in 1894 from where they traveled to exhibition crowds in London and the United States.  So moved were the readers of the Brooklyn Daily Eagle that they contributed hard won money to the Brooklyn Museum's campaign to acquire a full set of 350 watercolors of The Life of Christ.  And it is said it was to these that Lucas and Spielberg turned for visual details and inspiration in the making of the Indiana Jones movies.

So, no glazed eyes after all.  When you really look at Tissot's work, there is much to see.