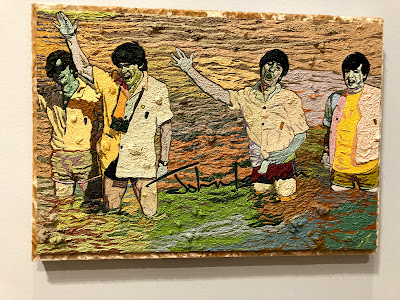 So while New York was exploding with the abstract, unemotional Pop, Minimalist and Conceptionalist movement and museum wall size canvases in the 60's, the relatively small and loose circle of San Francisco artists were intentionally out of step.  Doing smaller, more intimate, sometimes romantic and spiritual art, they often worked with found objects fashioned into collages and unusual, even bizarre materials.

Preeminent in this artistic time was Jess Collins (1923-2004) who began using the single name JESS after leaving his career as a radiochemist for the atomic bomb (yikes), entering art school here and moving in with his lover, the poet Robert Duncan (1919-1988).  Theirs was a long and openly gay union in decidely unopen times, and Jess's art often advocated for sexual freedom as well as freedom to express the mythical, whimsical and absurb.

This was the unparalled, innocent, 'summer of love' San Francisco Ciwt moved to, and she particularly enjoyed a quote from Gottardo Piazzoni, one of the other Northern California artists in
the Jess show:  When asked what religion he observed, Piazzoni said "I think its California."