Until she saw the painting pictured above, Picasso was at the top of Ciwt's personal favorite painters list.  She liked Matisse enough in 1992 to have traveled back to MoMA for its huge and hugely important Matisse Retrospective.  He was second on her list actually, but she thought of him as sort of a 'happy painter' who made wonderfully colorful, joyful but ultimately pretty art.

Then, hung on a MoMA wall by itself, Conversation jumped into Ciwt's soul.  She was in the midst of the crowds who had come from various distances around the world for the Retrospective, but it was as if she was all alone.  Alone and transfixed.  Her whole sense of Matisse and her relationship to him and his art changed in a nonsecond and forever.

Facing directly at each other, these two people - recognizably Matisse and his wife Amelie - are polarized. This is a real moment in the real lives of both of them. Whatever the conversation, it is more like a confrontation.  There's a coldness here, in the deep but stark blue color, her black robe, the stiffness of the rigid stripes in his painter's pajamas, the dark ebony grillwork separating them from nature.  In the most minimal, poetic and revealing way Matisse has distilled so much about the state of his marriage, his relationship with his wife, his isolation or stand-offishness as a painter.  (In fact one of the first things he said to Amelie before they married was " I love you, but I will always love painting more.") The feeling is so direct Ciwt might as well have been in the room with them.

So there it was Matisse is after the Truth in has art. Human truth. He's also in search of spirituality and attendant joy. And it is solitary, demanding work - deeply difficult for him and those around him. Including those of us who love his art. We see him in all his work; his presence is as unmistakable as it was for Ciwt in Conversation. But, he stands alone. We love, are profoundly - often joyfully -  affected by his art.  We follow him whenever possible but can never completely grasp him or his luminous, figurative and profoundly personal art.  In this we are in the best of company: nobody respected or was more tantalized by Matisse and his art than his artistic rival and real life friend Picasso. 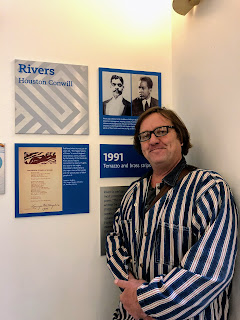