Walk: AMC Kabuki (Coco)
Distance: 1.5 miles, some exercises, probably a good day to back off

So, if for no other reason, go to Coco for the visuals.  Not just because there is a lot of (Ciwt) pink.  They are vibrantly alive fine art - so captivating Ciwt would have eagerly watched every frame even if Coco didn't have a story line.  But it does, one that sneaks up on you before you realize how deeply touched you are.

As she watched and got a little confused herself about what was life and what afterlife, Ciwt wondered if the children in the audience were following the plot and engaged.  Well, spontaneously after the movie as the credits rolled this happened: 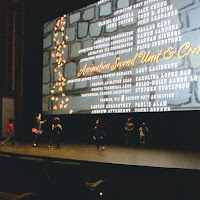 (Kind of hard to capture in the dark but the kids ran up onto the stage and began dancing around.  All the grown ups, including Ciwt, were standing around watching and taking pictures.  So unexpected and heart-warming).

*For people wanting to budget their time and only see excellent movie making be warned there is an unannounced and (as one viewer said) 'utterly asinine' 20-minute Disney short before Coco.