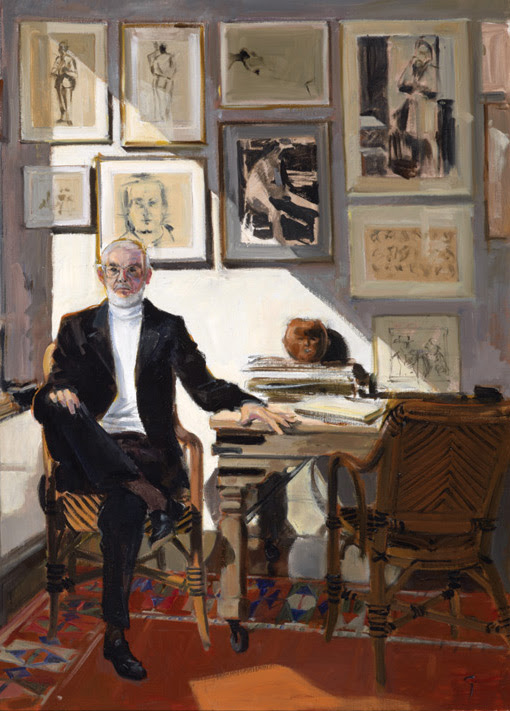 Here's Charles Campbell painted by his wife exactly as he looked for years and years at his North Beach art gallery.  All his works were by his friends - and were his friends.  If you ever asked him which piece he liked best - on the walls or in a show - he was truly mystified by the question.  He loved and admired them all.

He also was apparently mystified by salesmanship.  If you came to buy, he'd say "Wander around, see if there's anything you like."  You could go into his storeroom, look at his official galleries or around the walls of his office and various closets and drawers.  He just sat at his desk and did whatever.  Then if you brought something out and said you were interested, he'd say something like "Oh?" Or "Really?" Or "That's a nice work."  And when you'd done all the work and made your decision entirely on your own with no prompting, he would never, ever, ever discount the price.  Luckily I received the "What are people thinking when they ask for a smaller price?!#" rant early on so knew to stay totally away from that question.  He was not a snob or greedy and would work out payment arrangements if you needed one - never holding the work until you were paid up.  You could take it home, just pay as agreed.  I always did so I don't know if he prompted people who were late or just trusted and expected that they would come through as honorable people.

His artists were San Francisco's finest - Literally!  You name a famous and excellent Bay Area artist and he/she was a friend of "Charlie's" and showing at the Charles Campbell Gallery.  At some point in their careers many/most of them moved on/were offered deals they couldn't refuse by much more aggressive dealers who quadrupled (and more) prices, negotiated, sued for payment, actively courted and sold patrons.  I don't know exactly how that went down with Charles.  It was all very open, and he knew he had no interest or belief in playing the aggressive game, so the friendships remained along with many years of art by those artists.

There are are many Charles Campbell stories.  All much like mine.  So respected and so important to art lovers like me who were always welcome to poke endlessly around his gallery, listen to art stories and philosophies as well as Bay Area music and art history from the man who had been right there.

Last evening Thomas Reynolds Gallery opened  a show entitled 'Treasures from the Charles & Glenna Campbell Collection."  It was an absolute delight for me to see Charles there.

Here's from the invitation:

Treasures
From a Life of
Art and Music

Legendary gallery owner and jazzman Charles Campbell for half a century exhibited and befriended artists in San Francisco, including the major players in the Bay Area Figurative Movement — Nathan Oliviera, Manuel Neri, Richard Diebenkorn, James Weeks, Elmer Bischoff, Paul Wonner, Theophilus Brown and their colleagues. He has had a long association and friendship with Wayne Thiebaud.

Now 97, he and his wife, the artist Glenna Putt, have decided to share some of the treasures they kept for themselves, many of which came directly from their friends.

THE REMARKABLE LIFE
OF CHARLES CAMPBELL

• Born to second generation gold miners in January 1915 in Santa Cruz.
• Lived in Siberia as a child until the family gold mine was seized during the Russian Revolution.
• Moved to China and grew up in Shanghai.
• In Los Angeles, became an early jazz fan and was pianist Art Tatum’s chauffeur.
• Moved to San Francisco in 1947 and opened the Louvre Frame Shop and art supply store on Chestnut Street near the SF Art Institute.
• Met and sold supplies to emerging Bay Area Figurative artists and began to exhibit their work.
• Opened the Charles Campbell Gallery in 1972.
• Married the artist Glenna Putt in Katmandu, Nepal, in 1988.
• Formed the Campbell-Thiebaud Gallery in 1989 in partnership with Paul Thiebaud, son of painter Wayne Thiebaud, for a decade.
• Closed his gallery in April 2008 and retired at age 93.
• At 97, he remains enthusiastic about good art, jazz and wine.