Lower Ramu River Ancestral Figure (New Guinea)
Today was the last lecture in a de Young series on New Guinea tribal art.  (Next week begins African Art).  I'm totally ready to move on - even though the de Young has one of the premiere New Guinea collections in the world. (The Jolika Collection collected by Marcia and John Friede over four decades.  Please enjoy many of the pieces in a fine video: http://www.youtube.com/watch?v=pOx7PlL3Hag)
The main reason a change of subject calls to me is that the "New Guinea mind" is so different that even international scholars cannot fathom it.  As one after another of the lecturers/experts said, "The more I study, the more I travel to New Guinea, the less I know."  This elusiveness/unknowability is partially based on the fact that there are approximately 1,200 ancient tribes in New Guinea and even more languages - so what is knowable about one village may have no bearing on another village, even a contiguous one.  But the main mystery/source of incomprehensibility of New Guinea is the belief in ancestors that - with variations - permeates the whole of this huge, remote and often forbidding island.
Ancestors are eternal.  Each one 'began/became known' within and at the time of his or her story which has been communicated and passed on by songs, art pieces and rituals.  These songs, rituals and tribal pieces Are what 'history' is in New Guinea.  There is no written history.  Time too has a completely different meaning in New Guinea.  Time is harvest, wedding, the rains, etc.  Even direction is different to New Guineans: what is ahead, what you can see is the past; the future (the unseen) is behind, in back.
These ancestors who are eternal travel in and out of human or natural (tree, rock, etc) form.  With proper carving and ritual their spirits may be inculcated into art objects.  So many objects Become the ancestor for most of the tribes, and those ancestor objects have that spirit eternally. (That said, each tribe has totally different ancestors as well as the history-songs, rituals, beliefs, etc. that surround them).
The Powers imbued in the art was most vividly conveyed by last week's lecturer from Germany.  She said "If you have any feeling - any sense whatsoever - that this art is not for you, STAY AWAY!"  You kind of thought she was kidding or something.  But then she went on (and on) to say the objects carry spirits, energies, are the ancestors.  If you feel uneasy, she said, the ancestor energy in the piece(s) is working on you.  The ancestors in the art can make you sick, see to it that you are injured or killed - or be beneficial according to their energies.  The more she talked, the more she got into her emotions and relived her experiences of the presences of the ancestors in the field and museums.
It was kind of mad frankly.  But also a bit hard to forget even by people such as myself who tend to brush off this kind of information.  Apparently several people - docent trainees - at the lecture became very anxious, started realizing they had been having headaches or not feeling well, etc. during the New Guinea training.  I don't know if any dropped out of the training, but I do know there were meetings with the docent honchos presumably to talk about how to to proceed in the face of this unnerving, scary information.
And I haven't even gotten into the headhunting aspect of the ancestor/soul/spirit beliefs, a practice which was alive and well in New Guinea into the 1960's - (and possibly beyond, maybe even to the present in remote areas). 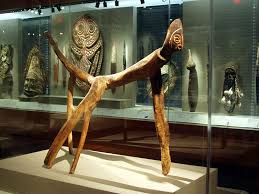