In the ninth inning of the 7th playoff game, a chilly, torrential rain blew into ATT Park, and this is how the people at the park reacted.

Last play.  Pop Fly caught by Scutaro - Hit by the man who had tried to injure him in a deliberate slide into second at the start of the series. 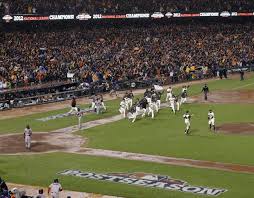 Closing Pitcher, Sergio Romo, jumps for joy.  Another man with an endearing story, like so many of the Giants.

Every seat stayed filled in the pouring rain until long after the TV interviews.  It was like it wasn't raining at all for the players and fans.

Giants Manager, Bruce Bochy, walks to center field to receive winning trophy.  In the background, every fan still in the stadium. 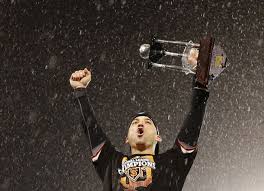 Scutaro celebrates the Giants' win and his MVP trophy.

If you don't want to talk elections, come to San Francisco where there is so much going on!!!
Posted by Ciwt at 5:53 PM