OK, on Halloween Eve, THIS is the long-awaited scoop on Jeopardy! 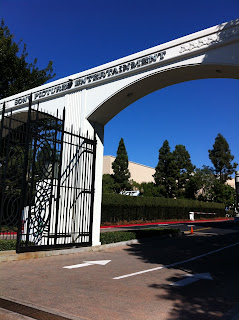 Sony Pictures Entertainment is about 6 Miles, 20 Minutes by Town Car from LAX. 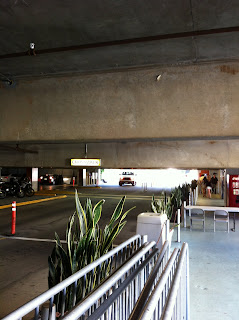 All visitors enter here.  This is where my Town Car and I were such a hit until they realized I was
'just' an audience member. 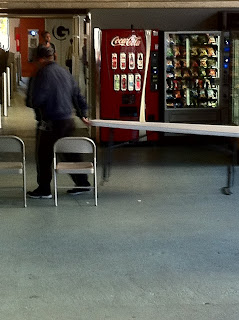 About 45 minutes before taping, Chris from the show sets up a table and audience members who have been waiting on benches or just standing around are instructed to come up and show him the Jeopardy pass we've downloaded after being approved on line.  (Passes are free; you go to Jeopardy.com Tickets, pick a date, sign up and then call about a week ahead to confirm).  He gives you a red "Jeopardy"wrist band after he has checked you off, and then you return to bench sitting and a 10 minute "Introduction" by a man who has been giving it for 30 years.  He tells you how to act (cell phones, cameras, walking no more than double file through the lot), the type of questions to ask/not ask Alex, etc.  He tells you so much, in fact, you kind of remember nothing and hope you're doing the right things anyway. 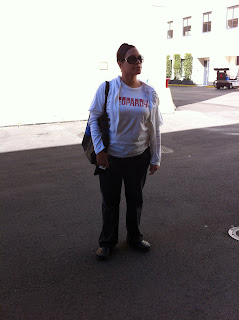 Then you're picked up and led to Studio 10 (a pretty good distance) by a staff member whose name I didn't get. 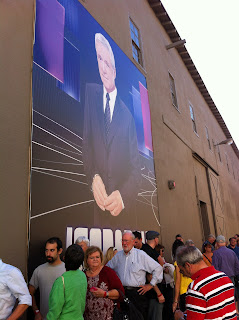 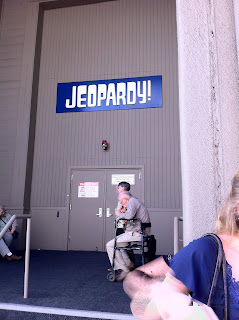 After entering the actual Jeopardy door to Studio 10, you have just a moment to walk down the hall and observe pictures, trophy cases for awards they won and other memorabilia. 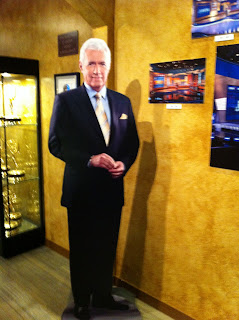 The cut out of Alex in the hall is the only picture you get of him.  Right after it is the door to the actual taping room where no cameras are allowed.  You've already been told by the Introductions man that Alex only takes pictures with the 3 daily contestants, so you won't get one of you and Alex.  This a factor of time. (You can contact the studio for a signed photo which they will send; might do this now that I remember).

But you do get to see a lot of Alex - much of it up close.  His stand during the taping is maybe 80 feet away from the audience so very visible.  And during the various breaks he comes and stands directly in front of the audience where he talks and answers questions from audience members.  He looks exactly as he does on TV and, to me, seemed more gregarious and chattier than I would have imagined. A nice man, and a bit of a character (which I also didn't imagine).

Johnny Gilbert (age 88 and really you wouldn't guess this!) is very present.  Talking a lot to the audience - especially at the beginning where he assigns our 'roles' - specifically 1. Silence and 2. Applause.  When the taping is about to start they have a sort of count down and several men stand in front of the audience like traffic cops with their arms up for Silence - which we are unless we see a light that blinks "Applause." Then of course we do that.

We're watching the actual show so we have a sense of when to clap. But even so, the blinking lights help (or helped me) stay present.  Because I've watched for so many years, and there is an actual TV screen you can turn to, it took a bit of effort to stay alert/present.  Part of my brain was back at home where I'm fixing/eating dinner, talking to Callie and phasing in an out of rapt attention - and it was almost weird to remember I was there live.

The contestants are off to our right side.  A little more difficult to see than Alex, but definitely visible.  They look directly across at the clue board which is Huge.  If they or Alex makes a mistake, time is taken during each break to correct/retape the line or lines that were flubbed.  Apparently the contestants have a private, coaching time early in the day to get used to the buzzer and who knows what else.  (They'd probably have to give me a new brain if I were a contestant because I'd be reacting like mad if I got the answer wrong - scowling, blurting out answers, etc.  I'm always amazed at how composed and TV-ready the contestants are).

Breaks are taken for commercials.  They don't play commercials, but they stop and attend to business during the commercial time.  Altogether there are probably at least 15 people other than Alex and the contestants active in the studio: producers, clue crew members, camera and mic people, Johnny Gilbert.  There is a long break after the first show is taped when Alex goes wherever and changes into a new suit and Johnny talks with and answers questions from the audience.  When Alex returns, we are reminded "It's a new day, you're a new, fresh audience!" and we return to our Silence and Applause.  At the end of the second show, the afternoon taping is complete. (They have 2 taping sessions; one in the morning and the afternoon one I was at which began at 2:30 and was over by about 4:15).

Two shows was about right for me.  I was actually kind of tired after all that Silence and Applause and staying present.  It's intense! Just sitting around being quiet/silent is one thing; concentrating/working on Being Completely Silent turns out to be quite another thing.  But luckily my Town Car was close at hand so I sank down into its leather seats and rode in comfort back to LAX.  Probably because of Sandy on the East Coast, I had LAX virtually to myself, whisked through security and was easily able to get on an earlier flight back to SFO.

Highly recommended for Jeopardy fans.  And, to everybody out there this dark and stormy night, BOO!!!!
Posted by Ciwt at 6:52 PM