A friend saved me big bucks on a cooking school I was thinking of attending.  For those of you who don't know me, this was a Basics series.  On top of that, the online description of the series essentially wasn't; just send in your money and trust that you'll know everything you want/need to know in six weeks.  I don't buy the Brooklyn Bridge, so let me say the school itself was recommended by a local chef who had her own TV show in NYC - ie, a very well-known local chef.  So, I  'know' the school to be reputable, but a three sentence 'description' along with no contact information is skimpy even for the most famous school in the world.

Anyway, my friend suggested deciding what exactly I want to know and then hiring a young (hungry) chef to come over to my place and teach me.  That's something I've considered over the years, but thought was out of my league financially.  But, as she pointed out, at the per session cost of the 'repudable' school, I could probably pay for several hours of that young chef's time.  And if it was a he ..... 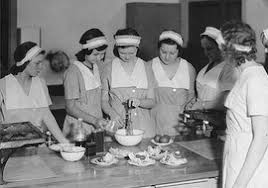